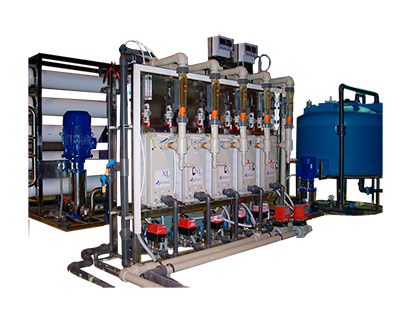 HELYX carries out a full range of turnkey commissioning of generating capacities: from the development of design documentation and manufacturing at its own production facilities to commissioning and further service support of the facility. HELYX manufactures HELY EDI electrodeionization units, which are part of water treatment systems.

Electrodeionization units HELY EDI are designed to produce deeply demineralized water. Depending on the required degree of water purification, integral membrane technologies are used as pretreatment before EDI: microfiltration or ultrafiltration at the pretreatment stage, the process of one- or two-stage reverse osmosis demineralization and membrane degassing.

Deep purification of water in the process of electrodeionization is achieved due to the difference in field potentials between the cation and anion exchange membranes - this design ensures the release of dissolved ions from the main water flow and uninterrupted recovery of the ion exchanger. The main components of the water treatment process are continuous and continue even under conditions when the composition of the initial liquid is devoid of dissolved ions. Thus, electrodeionization always consists of three elements:

Electrodeionization plants HELY EDI are designed as a filter press and are included in the water treatment circuit in series or in parallel, depending on the conditions of use. The alternation of demineralizing and brine chambers of this installation is provided by gaskets made of dielectric with a thickness of 0.7-1.0 mm. The channels for the supply and discharge of raw water and brine are formed by punched holes within the frames. Compression of frames and membranes is carried out using end plates.

A corrugated mesh is laid inside the chambers, which distributes the membranes and at the same time serves as a turbolizer for the water flow. The source water used in electrodeionizers requires pretreatment to minimize the possibility of sediment formation in the chambers from suspended particles subject to electrocoagulation of colloidal particles, sludge from the solid phase CaCO3 and Mg (OH) 2. In addition, iron and manganese ions and organic substances, the presence of which leads to a decrease in the electrical conductivity of the membranes, must be removed from the water.

Fill out the feedback form to get a consultation